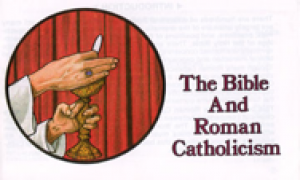 Be the first to review this product
Product ID: C31_the_bible_and_roman_catholicism_
Call for price
E-mail to a friend

There are hundreds of millions of Roman Catholics world-wide, yet many are largely unaware of the dramatic differences between the official teachings, practices, and positions of the Catholic Church, and the clear teachings of the Holy Bible.  There are multitudes of dedicated Catholics who are spiritually uninformed concerning these differences because of lack f sound Biblical instruction and exposure.

Though many Roman Catholics give unquestioned support to their church and strongly reject any possibility that their church may be in conflict with their own Catholic Bible, there are sincere Catholics who see glaring inconsistencies and the fundamental truths contained in the sacred scriptures.

This booket offers Roman Catholics, who are seeking after the truth, a clear-cut comparison between the major teachings of the Catholic Church and the Word of God.  The Word of God is the supreme authority from which all Roman Catholics must derive their beliefs and practices.  All scripture references cited in the booklet are taken from official Catholic translations of the Bible.
Login or Register to write a review.

Overcoming Offense
Instructs the believer in the fine art of healing offenses and...
Call for price

The Truth vs. The Lies

The Truth vs. The Lies
Clearly contrasts Christianity with other religions in the major...
Call for price

Are You Going To Heaven? Two Question Test Reveals the Answer

Are You Going To Heaven?
Our most popular evangelism tool with millions used to build the...
Call for price

Since the beginning of time men have wondered what happens to someone after death. Philosophers...
Call for price

E-mail to a friend

Get Exclusive Offers and News